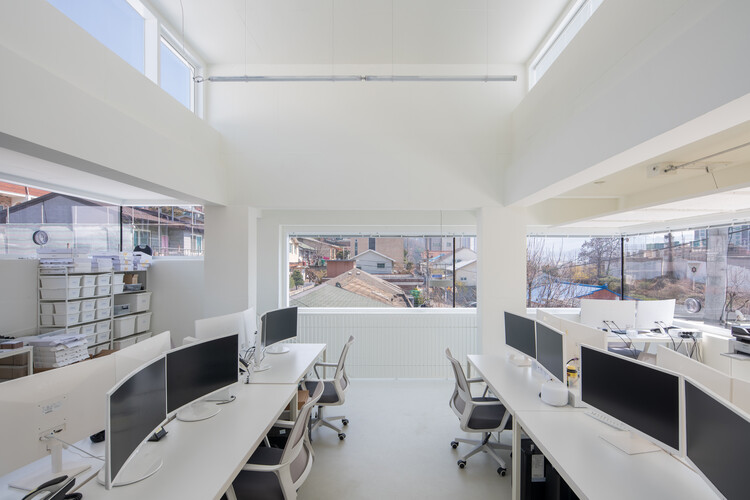 Office building. On the one hand, office buildings are meant to create comfortable and personal workspaces, on the other hand, to represent the identity of the company. We thought we could use a series of walls, everyday objects that we face and surround ourselves with, as an essential element for the design of the office building. We have created a response to the context, form and construction of the architecture, the emotional expression of the facade and the feeling in the space using simple methods such as construction, suspension, blocking and opening of walls.

To place. Standard one-story houses are aligned with the ground on which the stone embankment is placed. The site is located at the head of the line where the houses go down the slopes like stairs. The Village of Love, a rural housing complex which began as housing for government employees some 50 years ago, is architecturally impressive for its vertically repeated landscape scene following the slope of a hill with the horizontal line connecting the backfill, fences, roof plans. But we had no choice but to remove the horizontal line to secure the necessary parking spaces.

Wall 1. Exterior walls act as a fence placed between the corporate workplace and its neighbor’s living space to provide privacy for both. Given the difference in level and the distance between the office and the neighborhood, the wall blocks unwanted views while allowing the view from above. The fences come together to form each facade elevation and further the shape of the building. But the front facade of the house was created by rigidly repeating the horizontal lines of the fence, and not reacting to the environment.

Wall 2. The front facade, with Korean Hanji paper shades and metallic screens, is meant to relate to brightness and lightness, a different way of expressing the color white. White is Basics’ favorite color. Hanji blinds are made of 1m x 1.3m molded discs and panels made with mulberry wood fibers. In order to add a unique flavor to the entrance, we used metal screens made of twisted stainless steel wires woven on top of each other. These two business elements not only satisfy the company’s desire to describe itself, but also seek to soften the rigid impression of the facade.